Everyone loves a good pickling!!! Right? Well, if you don’t, you’re a strange brew indeed. I’ve been in love with pickles for as long as I can remember.  From the days of sucking the middle out and then eating the shell, slicing them in half long ways and making pickle boats with mac and cheese or cream cheese or laughing cow….. (it’s good) or slicing them super thin and sprinkling salt on them (like they aren’t salty enough)… I have been eating pickles every which way my whole life. BUT… I had not ever made my own, until now! I even got the little scurv to get in on the action.. he said it was so easy even he could do it.  I remember my grandmother making them.. but that was before I gave a shit about making my own shit. Everyone else was pretending to be Suzy Fukn Homemaker or playing house with dolls, but then there was me.. playing fort in the trees or demolishing the barbies and melting their limbs… or playing office. Anyhow, i’ve morphed into an irregular Suzy Fukn Homemaker now and I love to make shit my self. So here is my very first few Pickle recipes: it’s too easy to fuck up I promise.

Every one lusted after the lemon garlic dill thyme ones.. but the sriracha ginger were really good too. I wished my hot pepper ones were hotter! Next time gadget… next time. Either way, they are all gone now.  You really could put anything in there with the cucumbers.. Next time I want to make cilantro lime ones, or black pepper oil and rosemary, I might even shove some shrooms in there. Alas,  I have to wait for more gold coins to make more treasure!  So until then here is a weird  PICKLE SURPRISE for you dirty pickle suckers….savy?!! 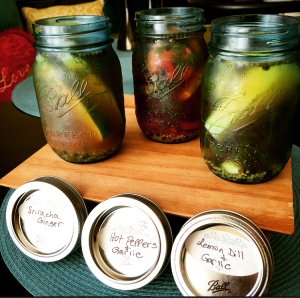 This fourth of July I made several things (I will post next). One of which was my “goin HAM rolls”. These rolls aren’t magic but they are pretty damned tasty… enough to be requested every year. I scoured the internet for a recipe just like it but apparently it’s pretty original. Everyone makes these with just pickles and cream cheese or rolled in tortilla to make pinwheels…ok. What ever floats your schooner.  I usually alter my recipes over time…this one is from my late momma and I don’t have to change it at all.  Mother effing Perfection rolled up and swallowed.  The key to a great “party appetizer” is simple first, then tasty… don’t try to be too fancy when it just needs to be a counter top finger food item.  From the Master at Arms down to the powder monkeys and swabbers alike, they will ALL have their dirty nose pickers all over these sons a bitches. So get out the biggest cutting board you’ve got in the scullery and go crazy! AAAAAaahhhhhhh!

AVAST YE! You’ve done it. Now try not to eat them all before the party. Here is some wacky ass shit. Watch it….and GO HAM!

Holy vegetables batman! We just can’t seem to get enough of this shit. I know some of you don’t “enjoy” cabbage or think cauliflower is blah… well… you sir/ ma’am are fucking lame. Wake up and smell the truffle oil spray y’all!  Go getchu some  if you cant find it. order it.  Its that awesome.  http://www.amazon.com/Mantova-Spray-Virgin-Truffle-8-Ounce/dp/B005HFZ0RG/ref=sr_1_1?ie=UTF8&qid=1434144005&sr=8-1&keywords=mantova+truffle+spray Some say it has a weird smell or flavor… well, yeah, if you eat it out of the spray can. Anyhow, Its good for fries, veggies, whatevs. Spray that shit on the poop deck for all I care and watch em all fall down. The spray isn’t that cheap, but that’s still cheap entertainment.

PS.  This particular snack does not stay crunchy in the fridge as well as we wish it would … so for parties its magical!  Good thing it doesn’t last on the table anyway, I barely even got any… its that fucking good.

I am a land lubber too.. and a lubber of nature.  I am so glad it’s magnolia season again.  My kitchen smells like my grandmas house and its AAARRGG-some!